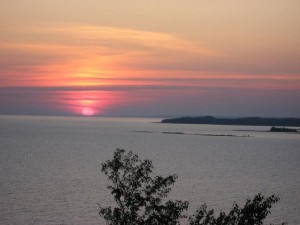 For example, everyone has tools for dealing with stress. Some people deal with stress by escaping or seeking a path of least resistance, while others deal with stress by taking control, sometimes aggressively. Through the practice of mindfulness meditation, a person can begin to recognize how they habitually react to situations and learn to “catch themselves” before reacting automatically.

Consider the case of Charlie, who had a habit of yelling and blaming others when he misplaced something. One day Charlie couldn’t find his lucky argyle socks, and his first reaction was to yell out loud to anyone within ear shot “who stole my lucky socks!”

After meditating for a few weeks, Charlie again couldn’t find his socks, but when he was about to shout, he hesitated, smiled at himself for recognizing his reaction, and chose another pair of socks instead. As a result everyone in the house had a better day, including Charlie.

Consider also the case of Jane, who routinely “tries to fix” situations she has no control over. One day Jane’s husband, Charlie, (a different Charlie…) couldn’t find his favorite golf socks. She was about to leave the house for work, but instead she stopped and went through his drawers until she found the socks he claimed were missing. She left the house late and experienced stress at work as a result. After Jane practiced mindfulness meditation for a few weeks, Charlie lost his socks again, and Jane started to react as always, but this time she caught herself. She smiled at herself for recognizing her reaction and said “Charlie, you’re just going to have to figure it out for yourself, I don’t want to be late for work.” As a result, Jane had a better day at work, and Charlie learned something about himself, his wife, and something about the relative importance of “lucky socks” as well.

These examples represent positive outcomes from developing self awareness through mindfulness meditation.  Many other benefits are possible from compassion meditation and from meditation that incorporates Christian Spirituality. Christian Tantric Meditation addresses all three of these meditation discipline areas.